Entebbe Airport Uganda. You can obtain your visa upon arrival if you haven’t done so before departing your country. A visa costs $100, and they will only take 2009 or 2013 US dollar notes.

Kigali Airport Rwanda. Rwanda now charge $30 for entry into the country. Therefore if you are arriving in Rwanda, it is best to apply for an East African Tourist Visa before you come. When you reach Kigali you will pay $100 for this at the airport. This visa will cover travel in Rwanda, Uganda and Kenya.

You may wish to take the bus from Kigali International Airport (Rwanda) to Kisoro. To help you on your travels and to get you going in the right direction we have created this handy PDF.

The dry season (December - February and June - August) is hot and windy although it can be cool in the evenings. Rainy season (March - May and September - November) is a mixture of heavy rain and hot sunshine. It can be cold in the evenings so bring a heavy jumper. A rain coat is a must.

This information is correct at the time of publishing. However, you should always check the local exchange rates online before travel.

People shake hands every time they meet during the day. Sometimes they will hold onto your hand for a longer period of time than you may be used to. When visiting a home food and drink are offered to honour the guest and in keeping with the rich tradition of hospitality. Don’t feel embarrassed by this. Alcohol is not forbidden, but it is often seen negatively amongst Ugandans particularly those involved in the church.

Ladies will need to wear tops or shirts with sleeves that cover the shoulders and chest. Trousers are ok to wear around town, but if you are involved in teaching or in a church a skirt should be worn. Skirts need to be below the knee but long skirts are more appropriate for church. Make sure tops are long enough so that when you bend over or sit down you don’t show any back.

Men when making a visit, for example to someone’s home or to church, should wear nice trousers and a shirt. For casual wear t-shirts are ok with jeans or trousers.

Among students and youth, casual clothing is fine, including jeans and t-shirts. Trainers and shorts are mostly for sports, (although you can also wear them to tourist places and activities), and flip flops are for in the house.

If you’re doing ‘tourist’ things, you can wear almost anything. By the lake you will see people in swimming costumes / bikinis, but you may want to have a t-shirt or sarong to wear over the top.

You should have no problem taking money out with a cash or visa card at an ATM. Be sure to notify your bank. You can also exchange pounds or dollars at most banks but some rates are lower than others. Bring NEW dollar or pound notes as old ones will not be accepted. It is also advisable to bring larger value notes (eg $100) as you will be offered a better exchange rate.

Wifi is available in a couple of places in Kisoro but connections can be slow.

It is not advisable to drink water from the tap in Uganda, so you will need to buy bottled water which is available at many shops and all guest houses and hotels. You should be careful what you buy from food vendors on the street, only use recommended sellers.

Here are a few essentials that we think every traveller to Kisoro should pack:
- Suncream and sun hat
- Unlocked phone
- Anti-Malaria tablets
- Wind-up torch
- Insect repellant
- Clothing for cool weather
- Skirts for women and long trousers for men
- Rain jacket 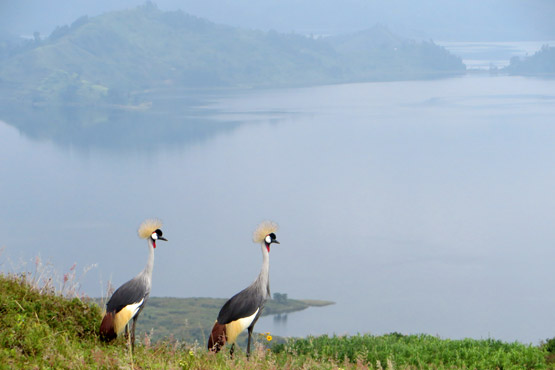 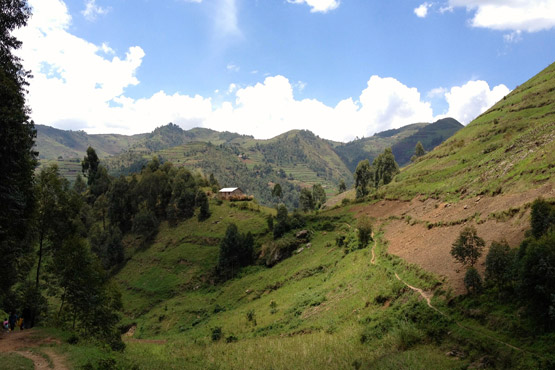 Kisoro District is located in the extreme south-western corner of Uganda. The area comprises of hills, lakes, forests, valleys and mountains which have been described as the ‘pearl of Africa’. Kisoro is incredibly rich in vegetation, enhancing the beauty of the landscape. From the steep hills and valleys in the north and east to the rolling hills and flat plains of the south and west, Kisoro is rich in geographical diversity. Whichever corner you turn, there is always something new to explore.

To the south of the district lies the Virunga Mountain Range, of which Muhabura, Mgahinga and Sabinyo are the three mountains which border Rwanda and Uganda. These mountains rise up above the town and can be seen from across the district. Due to the mountains being extinct volcanoes, the land is incredibly fertile and has a reputation for growing vast amounts of irish potatoes which are then transported and sold in Kampala. In the north of Kisoro, lies Bwindi Impenetrable Forest, where it is possible to find rare mountain gorillas. Towards the west, the land becomes flatter and rolling hills are small in comparison to those of the east.

Kisoro town is located 12km from the Rwanda border and 15km from the Congo border. It’s proximity to these increasingly stable countries is enabling the town to grow in both size and prosperity.

Kisoro district is most famous for being home to two populations of rare mountain gorillas; one in Mgahinga National Park and the other in Bwindi National Park. It also has around 50% of Africa’s birds including the Crested Crane, the national symbol for Uganda.

Within Kisoro the existence of ethnic groups of people comprising of Banyarwanda, Bafumbira, Bakiga and the Batwa ensure cultural diversity within the district. The varied ethnic groups portray variety in their crafts, art, culture, music and dance that provide visitors with a unique cultural experience.

Check out the weather